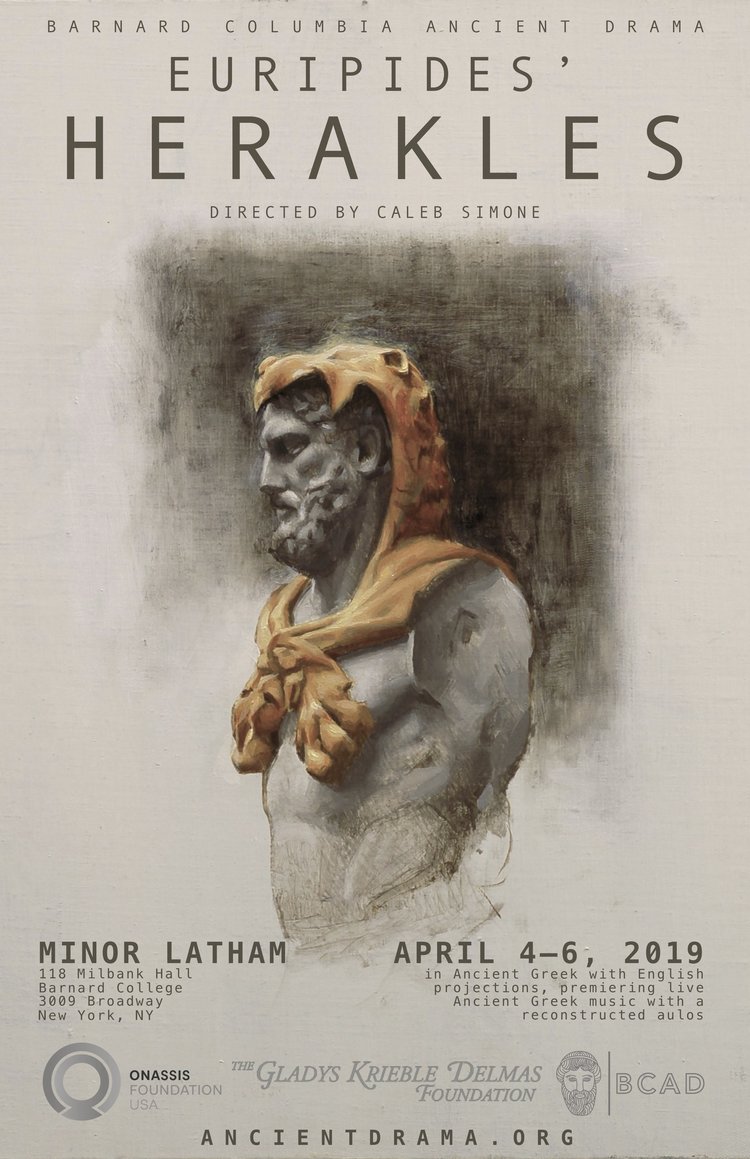 Several months ago, I went with a group of friends– mostly church people, from Emmanuel Anglican– to see a production of Euripides’ Herakles, in the original Greek, directed by our friend Caleb Simone. It was part of his doctoral work, with reconstructed music and choreography, and felt like nearly a church project: one of Caleb and Ashley’s sons played one of Herakles and Megara’s children; our pastor’s eldest son played another; our friend Edmond Rochat did the painting for the poster; half the people there were Christian. Herakles, the heir to the royal house of Thebes, is away, but the tales of his trials have returned before he has, in the mouths of bards:

He yoked the mares of Diomedes to the car,
And taught their mouths the iron bit to bear:
Unreined, and pawing in their gore-stained stalls
Greedy of human flesh for food,
And drank with savage joy their blood…

He slew Cycnus, the xenos killer,
Piercing him with his shafts, in blood he lies,
And gives the avenged stranger rest…

To the rich gardens near the Hesperides,
Where still the tuneful sisters pour the strain
He came. He plucked the ambrosial fruit that grew
shining on the boughs of gold.
In vain the watchful dragon wreathed around
His spires voluminous and vast;
The fiery-scaled guard he slew.

To the wide ocean’s foaming gulfs he passed,
making them calm for mortal men in ships.
Beneath the center of the skies,
he made his hands the foundation
going to Atlas’ home
And on his patient shoulders bears
The starry mansions of the gods.

Who of his friends, their country’s pride,
Did not in arms arise, to attend their chief?
The golden robes, the girdle of the queen
were his dangerous quarry.
Greece took the illustrious spoils
of the barbarian girl…

At the moment, though, he may be a little bit dead; he was last seen, at least, in Hades. His family are unprotected, and subject to the oppression of the tyrant who’s seized power in the city:

Unhappy orphans, for you are without a father’s guardian power
You poor old man, and you afflicted woman,
How is your heart with bitter anguish pained
For your lost husband is kept in Hades’ house!

Megara, about to die, addresses him:

O thou most loved, if any voice is heard among the dead in Hades, to you, Herakles, I speak,
Your father dies, your sons, and I too perish,
once by mortals called happy because of you:
hurry, come, aid us, and let your shade appear to me.
Your coming is enough, even if you come as a dream.

And her prayer is answered.  He returns– just in time. It’s so absurd, but for a moment I hoped for a happy ending. He defeats Lukos, who was about to kill Megara and Amphytrion and the boys; affectionately he greets his household gods, the boys will once again be the strong pillars of the house of Thebes.

And then something happens. The chorus is overjoyed, but asks a question– they ask

if what is just
is still pleasing to the gods?

And then Iris comes. She’s sent by Hera, to punish the house of Amphytrion because Zeus had, with Amphytrion’s agreement, slept with Herakles’ mother. The punishment had been delayed, because before now,

While he was finishing his bitter struggles,
necessity protected him
nor would his father
Zeus ever allow me, or Hera, to do him ill.
Since he has finished Eurystheus’ mandates
Hera wills that he bathe his hands afresh in blood,
his children’s blood; and I assent.
Hurry, and relentlessly seize his heart,
unwedded daughter of black Night,
Drive madness on this man, and child-murdering
confusion in his mind

And Herakles goes mad. And he kills them all– Megara, the boys, one by one.

His father, horrified, binds him to a pillar to prevent him from doing further harm. And then Theseus arrives. He’s heard about the defeat of Lukos, and was coming to help consolidate the victory. And now this.

Herakles had brought him, literally, out of Hades. Theseus tries to comfort his old friend, saying:

This ordeal from none other daimôn proceeds
Than from the wife of Zeus. You perceive this well.
To counsel others is an easier task than to suffer evils:
yet none of mortal men escape unhurt by fortune,
nor do the gods, unless the stories of the singers are false.
Have they not committed adultery,
to which no law assents?
Have they not bound with chains
Their fathers in pursuit of power?
Yet they hold Their homes on Olympus,
even thought they err.
What will you say, if you, a mortal born,
too proudly should contend against adverse fortune, but not so the gods?
Retire from Thebes, in accordance with the law;
follow together with me to the towers of Pallas.
There your hands from this pollution will I cleanse… The thing is, we’ve just seen all this happen, we know that Theseus speaks the truth. But Herakles – Zeus’ own son! – says something amazing.

I think not of the gods
as having committed adultery, which is not right,
nor as oppressed with chains
I have never thought this worthy, nor ever will believe
that one lords it over the others. The god,
who is indeed a God, needs nothing.

Ethical monotheism, divine aseity, all of St. Paul, all of St. Thomas, is hidden there. And then he says this, of the play that we have just watched, and all stories naming as “gods” what is not God:

“These are the wretched stories of the bards.”

Of which Euripides himself is one.

You watch this, and you hear the aulos calling, you feel it in your solar plexus, you see and hear and feel what you have read about, what Nietzsche wrote about, you see before your face virtue that is, at least ambiguously, separate from goodness. You look at Herakles in his lion-skin.

And glorious conquest crowned his brow. But here, in what should be the free innocence of paganism, of the good and bad, kalos kai kakos, the beautiful and ugly, uncorrupted by Jewish and Christian ideas of good and evil, we see a man, tormented by the evil he has done, and yearning for a kosmos in which the gods are good.

“Theseus, have you seen this agony of my sons?”

“Why then have you unveiled me to the sun?”

“Why not? Can mortal man pollute the gods?”

“There is no stain of guilt for friends from friends.” In the end, Herakles is redeemed, his pollution cleansed, because Theseus is not afraid of that pollution– he touches him, polluting himself; “becomes sin” for him, he brings him to his own city and restores him. He is better than his gods, and knows better how to be a friend.

It’s a play about men, about a whole civilization, even a whole language, tensed and waiting for the Gospel.

Do you think you can go back to that, innocently? The innocence that was there– Herakles’ own hope– was innocence that looked for the good that we now have, the good of a God who needs nothing from us, who is the God of Thebes and Athens both, and from whom both justice and mercy proceed. It was Euripedes’ own dream. We can’t squander it, not in the pursuit of some “authentic” “Europeanness.” Do you want to learn from the pagans, learn their wisdom? Then dammit, learn. Learn what Herakles knew, brokenhearted in his madness; learn to hope what he hoped, learn to desire what he desired. If we reject that hope and that desire, and instead welcome back those strong gods, none of us will be innocent.