NextHealth care is not a human right, but it is also not just a market commodity
Health & MedicinePoliticsReligion

Obamacare is the law of the land. For better or worse, we’re stuck with it for now. It still has problems — millions of people are still uninsured and its cost-containment measures, while often useful, are probably not enough to slow down rising deductibles and high premiums. American healthcare still spends more than comparable countries for worse health outcomes, as this graph shows: 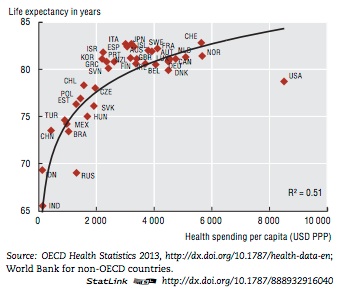 Conservatives argue that this somehow makes us more “innovative”, which is in some senses true but I don’t understand why this argument is coming from the people who are supposed to be standing athwart history yelling “stop!” Also, the innovation tends to benefit niche markets, which is great for the people in those markets but not really helpful for the population at large who are dying of things that we know how to treat, they just aren’t getting the care they need.

Fortunately, there are alternatives!

I will go through 3 things that are parroted as conservative talking points but really won’t fix things, each of which also illustrates a much bigger problem with the healthcare system that policy alone will have a hard time fixing. I will then lay out 5 options (in order of their political feasibility) that would meet the requirements for justice that I alluded to in my last post. Most of these options will feel icky to conservatives; quite frankly, maintaining the dignity of the Imago Dei is costly and choosing to forego what is necessary for that maintenance is injustice.

Things that won’t fix the problem

Everyone wants to get the healthcare they need, but they don’t want to pay too much for it and they really don’t want to pay too much for anyone else’s healthcare. The Republican motto lately has been “choice”, a concept that makes very little sense when it comes to choosing insurance. Since insurance is so expensive, anyone healthy enough to do so will generally opt for crappy insurance that covers as little as possible as long as they pay less month-to-month. Since it’s impossible to tell what exactly you will need until you get sick, this leads people to either delay or forego care if they happen to get sick when they don’t have a lot of money lying around to meet their deductible. So far, most Republican proposals I have seen to fix the healthcare system is “let’s subsidize our Byzantine health insurance companies harder and allow people to buy crappy insurance if they want.” This is not only a failure of imagination, but also of good sense.

I love tort reform. I think that randomly awarding millions of dollars to people who happen to call an aggressive lawyer is stupid and unjust. I think that fear of a lawsuit animates many bad decisions that doctors make. I want America to have a national no-fault system where everyone pays in and anyone who has a legitimate claim gets a payout. The only problem is that tort reform, when it’s been passed in particular states, really doesn’t reduce costs. Go ahead and do it, please, just don’t think it’s a magic pill to solve all our problems.

In theory, the idea of a Medicaid block grant is very appealing to conservatives like me (a similar idea will show up at the end of this post). If Maryland wants to spend its federal Medicaid dollars putting fresh food in corner stores and Oklahoma wants to spend its federal Medicaid dollars improving stroke protocols in its rural hospitals, that intuitively makes more sense than the federal government trying to micromanage healthcare for 70 million citizens. The problem is that this doesn’t really slow down healthcare costs as long as the rest of the plan involves subsidizing insurance companies, and since the Republicans were planning on whittling down Medicaid spending this way, it would probably end up forcing people off Medicaid into nothing or crappy insurance.

Things that would be better than our current system

Ross Douthat explained it here, but there’s room for American experimentation (like PEG has suggested) and this proposal has actually been floated in the Cassidy-Collins bill. The basic idea is that the government pays for all preventive care and enrolls everyone in a catastrophic insurance plan. People can then either buy insurance on the market for their other needs or use a Health Savings Account (HSA), which is subsidized for the poor. How just this system works out to be in practice depends very much on how high the bar is for catastrophic care and how generous the subsidy is for HSAs. One way to make things fairer would be to break the most common (and the most expensive) chronic diseases into tiers that multiply your subsidy so that healthy people get a small subsidy that could cover your trips to the doctor for a cold or broken bone while sicker people would get a significant portion of their monthly costs covered.

2. Take Obamacare To Its Logical Conclusion

You could also call this one “Make America Germany, France, or Belgium”. I rated it highly on the political viability scale because it’s the easiest step to take: all we have to do is fix prices (which virtually every other OECD country with a free-market system does). You then raise taxes until everyone who needs Medicaid gets it. There are other things that ease this, like forcing every insurer and every doctor to work together as Germany does or paying your subspecialists less while making medical school cheaper, but you have to raise taxes and fix prices in order to cover everyone while slowing down the cost juggernaut.

3. The VA For Anyone Who Wants It

The American public seems to have this bizarre perception (mostly based on anecdotes) that a publicly run healthcare system like the VA or the NHS is an awful mess. This may be true, but the rest of the American healthcare system is even more awful, so the health outcomes between the two systems are about the same or better. The scandals that grab headlines are, in fact, not as bad as people quietly dying of preventable causes because they couldn’t access healthcare. The government could simply eliminate Medicaid, Medicare, and tax exemptions for health insurance and use that money to build out the VA system such that anyone who needed it could use it. Anyone making enough money to choose otherwise could do so (although surely many people would opt for the convenience and cost savings of using the public option). If the VA managed to maintain its current quality standards (admittedly a tricky proposition when scaling up), everyone who needed healthcare would get it and all those people that Paul Ryan is deeply concerned about can get so much choice they’ll get tired of choosing.

It’s simple: everyone gets Medicare. This is a pretty radical restructuring, but it works for a lot of countries who pay less per capita than we do. The government gets to negotiate whatever prices it wants to keep the system solvent, and everyone gets care. People still have the choice to see whatever doctor they want, so from the patient perspective it’s more of a free market than the current system.

5. Blow It All Up And Build A Distributist Paradise

This is the most radical option, but it also has the most potential to create a better system than what we have now. I sketched out some of the basic points of a distributist system here that can be applied to any of the above systems, but I think it would still be wisest to federally fund and deliver the basics, primarily using community health workers to do a lot of basic chronic care and preventive care. Mid-level providers could do a lot of the day-to-day hospital work, acute visits, and slightly more complex chronic care. They often do this now, but the basic assumption of the system would be that doctors shouldn’t do anything that someone who was trained less than them can do. (This is an infrequently deployed and frequently underdeveloped conservative talking point that I agree with.) Doctors, in turn, would be responsible for the more complex and sick individuals. Churches and other community organizations would partner with hospitals and doctors to provide the sort of services that hospitals now employ an army of social workers and case managers now must do.

Funding everything else is the fun part: eliminate Medicaid, Medicare, and tax exemptions for health insurance so you can start from scratch. States, cities, and municipalities then have the freedom to raise taxes, operate charitable foundations, or whatever else to finance their local healthcare systems however they wish. Or you could create a federally-funded mandatory HSA for every person that they could use to buy insurance, save as they wish, or self-organize into cost-sharing or local funding schemes. States could choose to take a cut (or all) of this to create its own public option, or let citizens choose whatever they want. Liberals who wanted to help subsidize care for the poor could join national or state insurance schemes designed for this purpose, and conservatives who wanted a perfectly free market could do business with providers as they wish. There would have to be some sort of national accountability linked to health outcomes in order to keep parts of the country from being shafted, but this would not have to be terribly complicated (e.g. if a county in Mississippi falls below a certain level of infant mortality three years in a row then Mississippi has to work with the Feds to clean up its act or it starts to get massive fines).

This last option would work best in sync with other distributist reforms, although in many ways it bleeds into Option 1 if you start off blowing up fewer things. This move also requires a certain amount of civic virtue and solidarity, two things that are currently in short supply nowadays. Yet it also has the most potential to get at some of the underlying factors that have created the crisis we’re in: there is no way to get around our civic dysfunction without a greater movement toward solidarity, as I have argued elsewhere. Giving power back to the people — despite the crisis such a move would precipitate — provides an opportunity to create the conditions under which we can address our existing crises together.